Pull onto a ledge then reach through to some small holds as you climb past the roof and tread left. 6 bolts, This route has a perma draw to protect the crux move.

Your destiny is to fulfill those things upon which you focus most intently. So choose to keep your focus on that which is truly magnificent, beautiful and uplifting and joyful. Your life is always moving toward something.

​To inspire people , you have to be inspired.  Jerry Barnett

​Go after what will make you happy. Love life and live with passion.  Edith Packer

I live my life intensely and the rewards are intense.  Peter Croft

These boulders face each other in an alcove about 60 yards from the route Fistful of Color.

Climb an arete keeping your right hand and foot on the arete and the left on the face while shooting for the top.  3 bolts  FA  Jerry Barnett

Its always the simple that produce the marvelous.  Amelia Barr

​This boulder is located downstream from Cowgirl Boulder  about 100 yards by the creek.

Smaller holds leads into a few tricky but enjoyable climbing through some good reaches.  3 bolts  FA 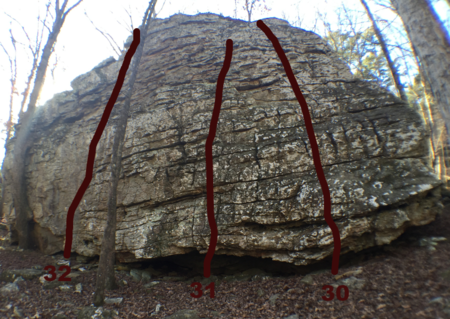 Climb under a roof using a finger tip undercling  to gain access to the upper face climbing. 3 bolts  FA  Jerry Barnett    Stick clip first bolt from boulder next to climb.

Climb along a crack using flakes, jugs and ...the crack. 3 bolts  Roger Mckinney

​Nice climbing under a roof and using an arete pulling through to fun climbing above. 4 bolts 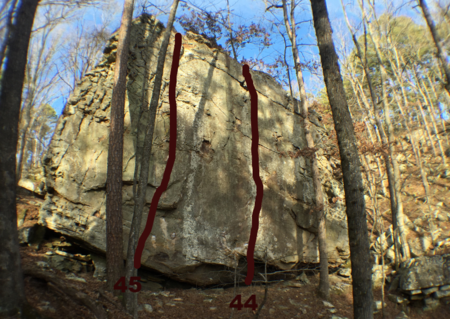 This is the main climbing area , most people never venture past this area, but they should...From parking area head west for about 30 seconds , to top of PK boulder , then follow a trail  down to your right around the boulders to the base of PK boulder (routes 22-26 start here) or stay along top of cliff  line south  for about three minutes till cliff line drops out , you will find a corridor on your right , turn right and follow it till it opens up into climbing area. ( routes 74 & 75  will be on your right and left respectively ) 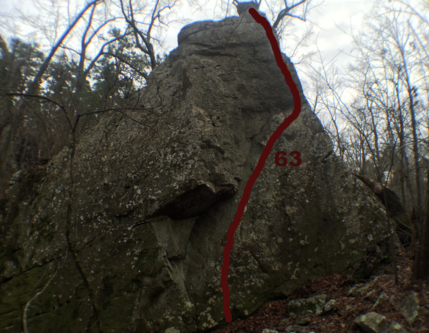 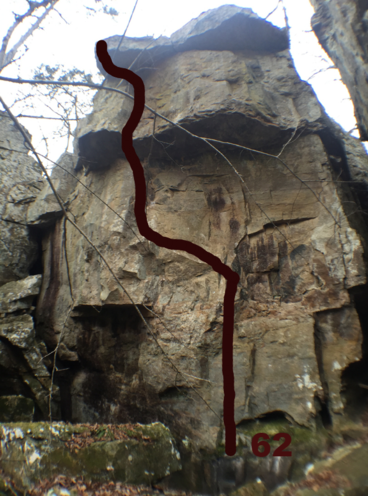 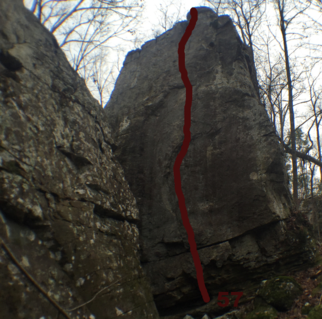 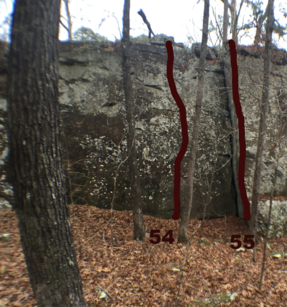 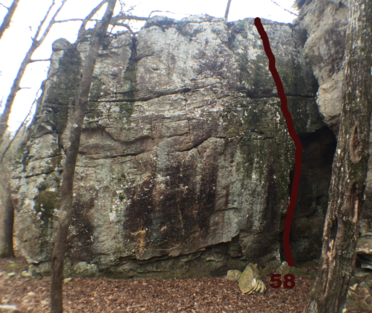 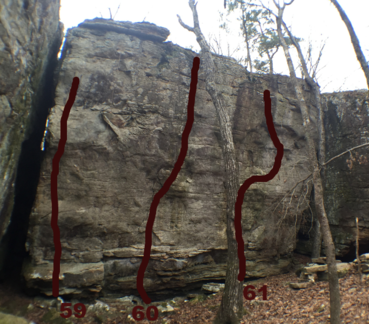 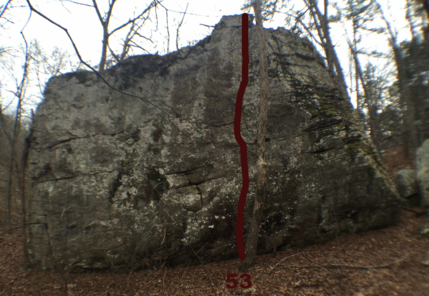 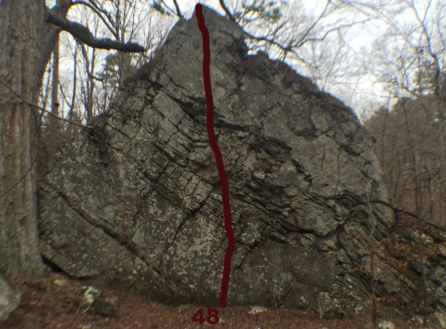 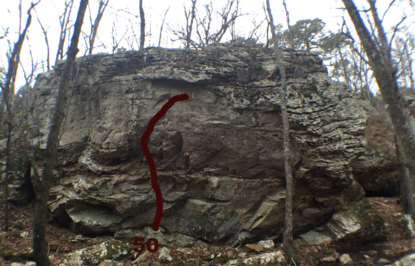 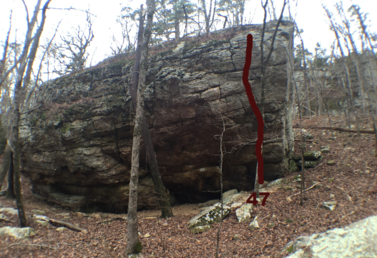 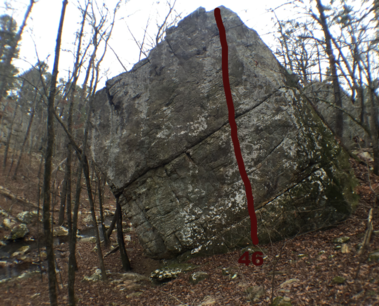 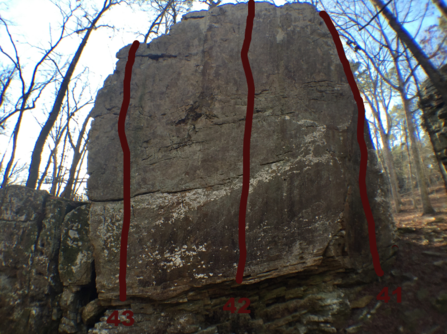 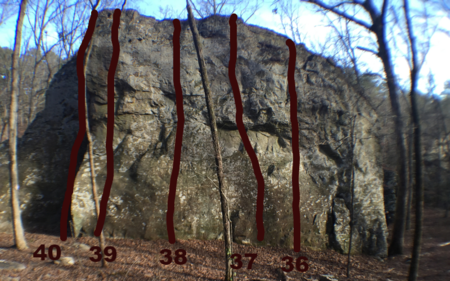 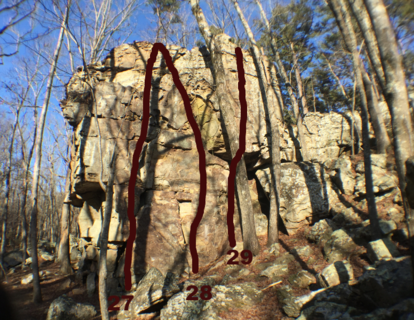 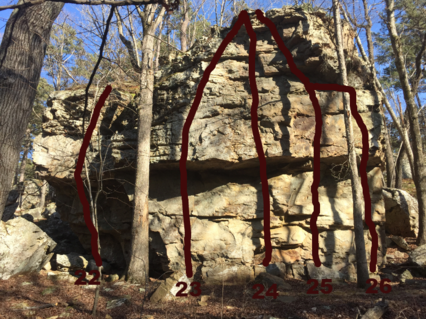 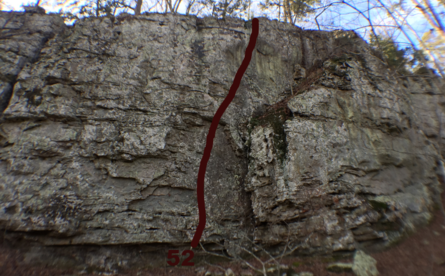 The trick is to visualize it in advance, to find the key that makes turning back more difficult than going up.  Jim Wickwire

Keep your face to the sunshine and you cannot see a shadow.         Helen Keller

Once you replace negative thoughts with positive ones, you'll start having positive results.           Willie Nelson

Slab climbing brings you to an arete then to the anchors. 3 bolts

This boulder/wall is located about 100 yards south from the route Gay Mafia.

This mildly interesting route requires you to pull through a few bad holds of crimps and ledges before gaining the anchors. 3 bolts  FA  CB Stotts    This route is bolted....well not so well, meanders everywhere.  This route is northwest of Moses on the cliff line.

​This east facing wall is located west of the route Moses, there are only two routes on this wall.....As of now.

Success is going from failure to failure without losing your enthusiasm. Winston Churchhill

This boulder is located 100 yards south from the Factual Boulder.

A balancey start climbs to a small roof then straight  to the chains. 3 bolts  FA  Jerry Barnett

Short compression move that stops EVERYONE, after that it leads to a fingertip undercling climbing to finish at the same anchors as Alien Disco. 2 bolts  I bolted this in 97, still hasn't seen an accent.

A few difficult moves lead to a small roof and enjoyable face climbing to the anchors. 5 bolts   Roger Mckinney

Start under a roof pulling on flakes till a fist jam in the roof crack pulls you over the roof.     FA  Roger Mckinney

Work your way up onto a shelf then lieback a crack to a hard thin difficult move or two brings you to slightly easier climbing. 4 bolts

A short but fun overhanging arete will keep you pulling hard to the end. 3 bolts  FA  Jerry Barnett

​Proceed through flakes and a crack, to turn a roof.  No anchors  FA  Jerry Barnett

Most of us have far more courage than we ever dreamed we possessed.  Dale Carnegie

This boulder is next to the Lesbian Boulder, on the south and north side of the boulder is where the climbing is located.

Climb ,on a nice large flake then heads right to the arete, follow straight up the arete to the top, try and not climb face on your right. If so then route is 5.8. 4 bolts  FA  Jerry Barnett 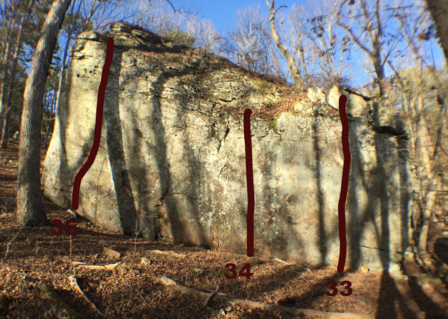 When you've got something to prove, there's nothing better than a challenge.  Terry Bradshaw

Work your way up an impressive but HARD face using crimps, sidepulls, and whatever you can wish into holds. 3 bolts

Climb a thin crack/seam to the top. 3 bolts       FA  Jerry and Amanda Barnett

Climb up sidepulls and pockets on an overhanging rock to the hard non positive holds up top. 3 bolts

Its is in your moments of decision that your destiny is shaped.  Tony Robbins

Another bouldery start leads to a small bulge, climb on to some akward holds then shoot for the anchors. 3 bolts  FA  Elliot Bell                     Equipper Jerry Barnett

A slab start leads to hard moves on the arete and throw to a pocket. 2 bolts  FA  Jerry Barnett

Proceed  on a nice crack as you lieback and climb a slightly overhanging section up top. 3 bolts  FA  Jerry Barnett

Start on a bulge then proceed to climb the slab to the anchors, large holds abound. 2 bolts          FA  Jerry Barnett

​Climb up to a roof then proceed through nice large holds to the anchor. 4 bolts        FA  Mike Hong

​Slab climbing brings you to a toss up top then on to the anchors. 4 bolts  FA  Jerry Barnett

The five S's of sports training are: stamina, speed, strength, skill, and spirit; but the greatest of these is spirit.  Ken Doughtery

A very bizarre climb, brings  you through a few ledges, wander left to non positive holds, work your way to one roof then another.  Should be bolted by spring 2015

This boulder is located south of the Psychadelic Wall/Boulder about 300 yards. Follow cliff line in back of Jesus Boulder to a corridor, go through the corridor when it opens the second time on your right, the wall will be on your right.

A slab route requiring good footwork and a will to run it out to the anchors. (though the climbing from second bolt is very easy)  2 bolts  FA  Jerry Barnett

This boulder is located next to and south of the Charlton Heston Boulder, almost in the creek.

This climb is located on the northside of the Charlton Heston Boulder. Pockets and a long reach on small holds get you past the crux and on to the top.  3 bolts  FA  Jerry Barnett

Don't let the fear of striking out hold you back.  Babe Ruth

To the mind that is still, the whole universe surrenders. Loa Tzu

This boulder is south of the Small Wall Boulder, almost next to it.

I hated every moment of training, but I said "Don't quit. Suffer now and live the rest of your life as a champion."  Muhammad Ali

Start with an obvious flake and proceed on razor sharp holds to a shallow two finger pocket then to the anchors. 2 bolts  FA  Daniel Carnahan    I bolted this in 97 thinking it would be maybe 5.12b/c.... well 17 years later it finally got sent.