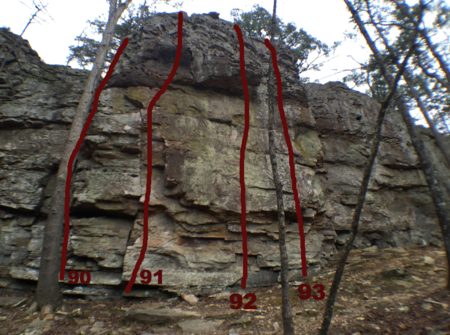 It doesn't matter how slow you go as long as you don't stop. Confucius

My optimism wears heavy boots and is loud.  Henry Rollins

You can not have a positive life and negative mind.  Joyce Meyer

​In order to carry a positive action, we must develop here a positive vision.  Dalai Lama

A crux move awaits you right from the start, climb up a balancey face to another crux move by the overhanging top.  4 bolts FA  Jerry Barnett

Start with a thin crack then head up to an overhanging section, try to stay with line of bolts up top, not venturing far left.  4 bolts  FA  Jerry Barnett 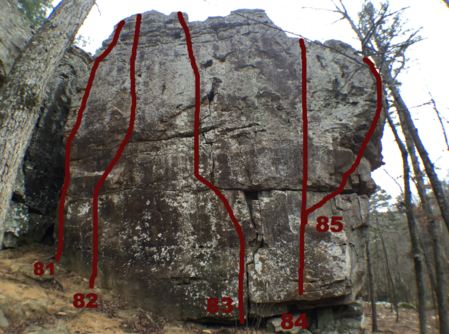 Climb up an arete to a small roof then try the blind throw to finish the top. 3 bolts  FA  Jerry Barnett

Up an arete to a small roof brings you to the crux and pull through to small edges letting out a battle cry reaching the top.  5 bolts  FA Cole Fennel  Jerry Barnett​

​Climb a dihedral and an arete through cracks and ledges.  FA Jerry Barnett no anchors​

​This is the main climbing area, encompasses Reservation Wall, Bleeder Boulder, and the Nasty Wall.  If you walk through the corridor from the parking area...well then, you are here.  Climbs are numbered from north to south.

All routes that say project* have been climbed on top rope and the grade a good guess, just waiting to be bolted. If routes says project, it has not been climbed. All routes have anchors unless stated otherwise.

This smaller area doesn't  get much love , but it should. There are only seven routes here , but its worth the three minute walk. Walk along the cliff line         ( where " Boob Sweat" is located , route 100) follow a trail heading south , the cliff line will disappear for a minute then pick back up , this is the Oriental Wall. There should be four more routes by spring of 2015 , from 5.10 to 5.11+ located about a three minute walk southwest, across the stream.

This is the main climbing area , most people never venture past this area, but they should...From parking area head west for about thirty seconds , to top of PK boulder , then follow a trail along top of cliff  line south  for about three minutes till cliff line drops out , you will find a corridor on your right , turn right and follow it till it opens up into climbing area. ( routes 78 & 79  will be on your right and left respectively ) 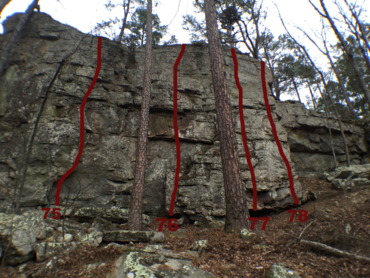 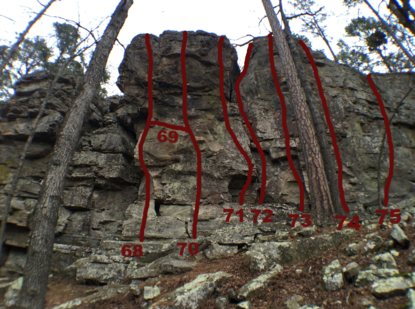 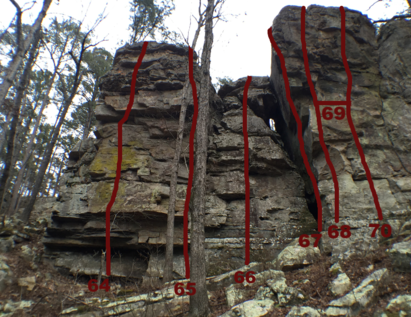 Another nice slab with small holds and a few pockets get you to the anchor. Shares anchor with Drunken Monkey.  4 bolts

This area is located south of the Oriental Wall about a seven minute walk. On the right you will see a cairn of rocks and the walls are  about a  thirty second  walk west.

Work your way up this overhanging section of dirty rock on big holds, reach for the big roof and pull onto a nice face.  3 bolts  FA  Jerry Barnett    Will be cleaning bottom section soon and hoping to get a few more bolts in.

​This boulder is located on your left when coming out of the corridor. 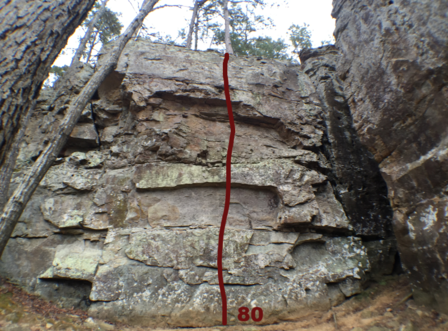 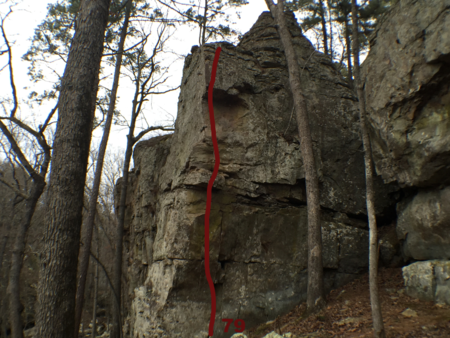 Lieback a large flake/crack to a ledge then head to the chains.  FA Jerry Barnett

Start on a small ledge and climb to a second one , shake out because the business starts here, climb an overhanging section to the anchors. 5 bolts  FA  Chris Robertson  Equipper  Jerry Barnett

​From the corridor walk 200 yards north along the cliff line, the routes start here.

This sometimes dirty route is noticeable by a tree leaning against it. This route requires strong tendons as well as good footwork as you pull through crimps and pockets. Substained through out. 3 bolts  FA  Jerry Barnett

A different view of the route facing west

Work your way to a large roof and somehow pull through this beast and climb a great face . 4 bolts

A bouldery start leads to small crimps and edges tread left and stay in line of bolts.  3 bolts  FA  Jerry Barnett  Some people opt to start right on a small arete and water runnel and climb up that way, if so, then 5.8.

​Around the corner from Cowboys and Angels.

Work your way up ledges to a lieback crack, turn a small roof, then on to the crux roof, jugs wait for you up top.  5 bolts  FA  Jerry Barnett

Great face climb that takes you through small edges and flakes. 4 bolts  FA  Roger Mckinney Jerry Barnett   There is a variation that starts to the right of the bolts. Very bouldery 5.10c

Some fun arete climbing has you keeping your balance as you try and unlock the moves. 3 bolts  FA  Jerry Barnett

Climb up the arete to a hard move up top, stay on the left side of the arete. 3 bolts  FA  Jerry Barnett

​Climb up crimps staying in line with bolts, small sidepulls lead into a small iron cross move then continue on up to a nice finish. Most people move FAR right for a shake out at second bolt then continue to the third bolt, missing the nice crux and beautiful moves that get you there... if done this way its 5.10. 5 bolts   FA  Jerry Barnett

A crack running up the middle of the wall.   FA  Jerry Barnett  no anchors

​Right from the start its hard, pull a small roof, then work your way up to the ledges and the second crux, pull through another roof and easy climbing to anchors.  6 bolts  FA Jerry Barnett 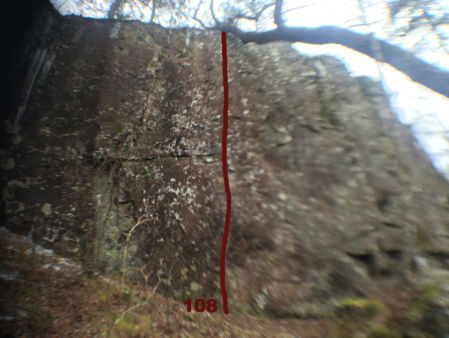 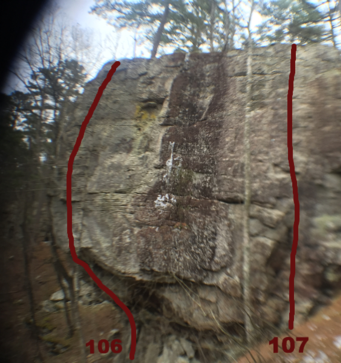 Start back in the cave on a fist size crack, climb horizontal out to where the crack works its way vertical, jamming and stemming to the top. no anchors

This route starts under a rock shaped like the state Oklahoma, work your way along through ledges and pockets, nice face climbing.  6 bolts   FA Roger Mckinney

Work your way along an arete to another overhang finish. 5 bolts  FA Roger Mckinney

​Climb the bottom section of Trail of Fears to the ledge then head left to the second bolt of War Apache and finish on that route. 5 bolts  FA  Jerry Barnett

High step starts this route on a wonderful slab.  Only gets harder as it goes up.  3 bolts.  FA Kevin Wagoner

Side pulls and crimps lead to a shallow one finger pocket toss to another bad hold, finish at anchors.  3 bolts 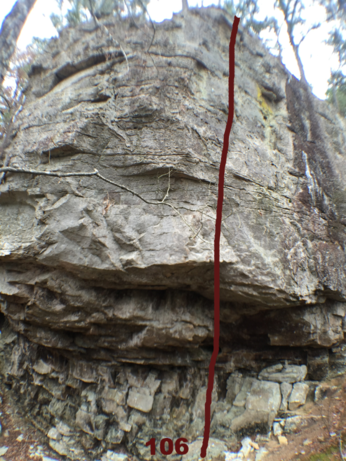 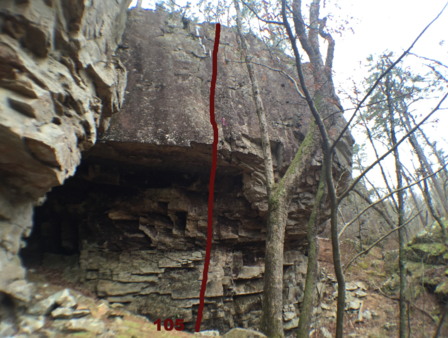 This area is located south along the cliff line from Boob Sweat about a three minute walk.

Climb up to a large ledge then pull through some SMALL crimps and sidepulls to gain access to the upper section....Going left to undercling then bumping to a crimp makes it 11c...going to the right to a sidepull then up to a pocket then jug makes it 11a. 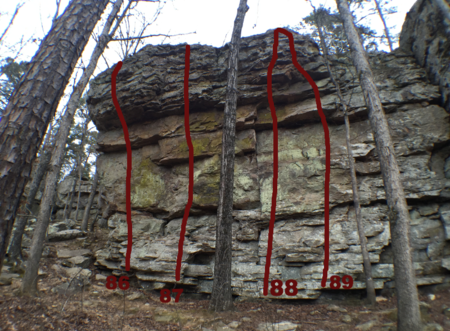 ​Follow the path of least resistance as you climb this crack treading left.  FA  Roger Mckinney

A series of side pulls lead to a decent ledge, follow through on crimps to reach the anchors.  (Deceptively hard)  3 bolts

Climb a series of ledges to gain a crux up top. 4 bolts  FA  Jerry Barnett

Easy climbing on ledges and side pulls leads to the anchor.  5 bolts  FA  Jerry and Amanda Barnett 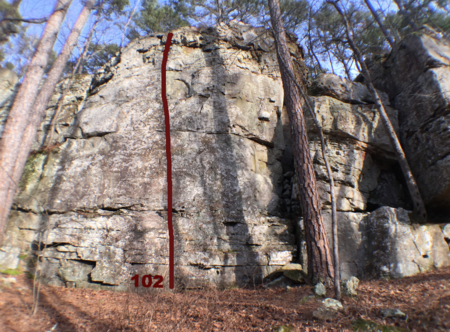 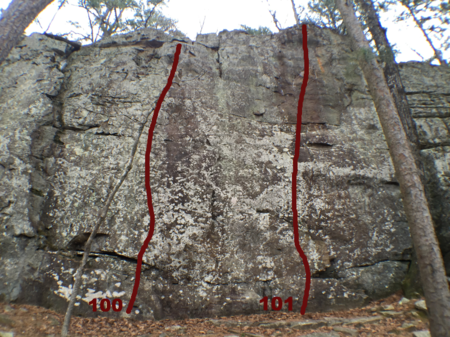 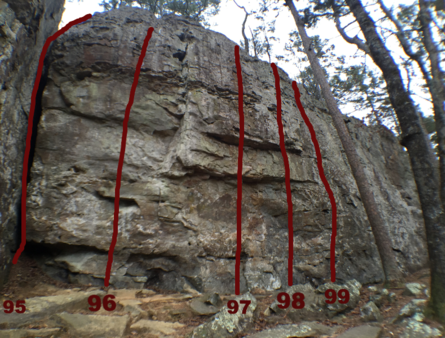 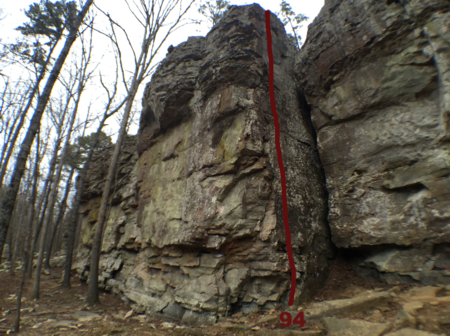 Pimp your way through an easy start to a slightly overhanging section up top with a long reach. 4 bolts  FA  Jerry Barnett

Climb up through a chimney as it flares up top, better have some BIG cams or be willing to solo it...I didn't have any cams large enough..oh well.  FA  Jerry Barnett

Scramble up to a ledge, then pull on side pulls and climb through a roof and on to jugs up top.  4 bolts  FA  Jerry Barnett

Start on the left side of the arete, work your way up to the right overhanging section. 4 bolts  FA  Jerry Barnett  A variation is starting directly under the arete, this is 5.10d

Coming out of the corridor this climb is on your right.